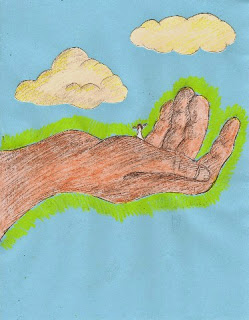 I realized for the first time today, as I read Acts 12, that the apostles Paul and Barnabas were in Jerusalem delivering their gifts to the poor when Herod had James executed and Peter imprisoned, from which he miraculously escaped.  I never noticed this before.

But as I examined the passage further, I saw how the supernatural hand of God moved during a major political, social, and environmental crisis.  I began to see how this applies to the current crisis we are experiencing in the world. This gives us another great picture of what the kingdom of God is like.

The church’s unselfish response to worldwide famine
During the first century, a prophet from Jerusalem went to Antioch and spoke of a global famine that would come, which is equivalent to a modern day Great Depression.  “One of them named Agabus stood up and began to indicate by the Spirit that there would certainly be a great famine all over the world. And this took place in the reign of Claudius. And in the proportion that any of the disciples had means, each of them determined to send a contribution for the relief of the brethren living in Judea. And this they did, sending it in charge of Barnabas and Saul to the elders.” (Act 11:28-30)

Even though the prophecy was that the great famine would be all over the world, the church in Antioch acted entirely unselfishly, thinking about their brethren in Judea, and sending gifts to them.  Their first thought was for the well-being of their brothers and sisters in Judea.

Herod’s execution and imprisonment of apostles
There was a political crisis in that Herod wanted to pump himself up.  This was also a social crisis, because others were harmed by his political actions.  “Now about that time Herod the king laid hands on some who belonged to the church in order to mistreat them. And he had James the brother of John put to death with a sword. When he saw that it pleased the Jews, he proceeded to arrest Peter also. Now it was during the days of Unleavened Bread.” (Act 12:1-3)  Herod’s actions were entirely selfish.  If he saw that something pleased the Jews, which brought him popularity, then he did it.  No matter who had to suffer or die, Herod did whatever was politically expedient to strengthen his own position.  He didn’t care about anyone but himself.

Herod’s selfish actions during the famine and his demise
God miraculously sent an angel to rescue Peter from prison. After Peter’s escape from prison, Herod did not give glory to God, but had the guards executed. Not only did he have people put to death like he did to James and the Roman guards, he had the power to withhold food from starving people, like he did with Tyre and Sidon. He then went down from Judea to Caesarea and was spending time there. “Now he was very angry with the people of Tyre and Sidon; and with one accord they came to him, and having won over Blastus the king's chamberlain, they were asking for peace, because their country was fed by the king's country. On an appointed day Herod, having put on his royal apparel, took his seat on the rostrum and began delivering an address to them. The people kept crying out, ‘The voice of a god and not of a man!’ And immediately an angel of the Lord struck him because he did not give God the glory, and he was eaten by worms and died.” (Act 12:20-23).

I would imagine that there were likely disciples of Christ in the crowd down in Caesarea, who were listening to Herod’s speech, and they would have heard some of those in the crowd say that Herod was a god.  I wonder how those disciples responded among themselves.  I can just imagine that one of them might have turned to the others and said something like, “He’s only a mortal man like us, and he will die at his appointed time.  There is only one true God, the Father of our Lord Jesus Christ, who lives and reigns forever!”  And perhaps the other disciples responded by saying, “Amen!”  We don’t know if this happened, but it is quite possible, and then moments later, Herod was struck by worms and died.  Things like this happened during those days, such as the way Ananias and Saphira dropped dead and the way the Lord struck Elymas the sorcerer with blindness.

In this passage, God’s divine activity in the church during famine and persecution was very evident.  In the midst of a major crisis -- famine and persecution, the Lord miraculously and lovingly took care of His people.  He also performed signs and wonders to confirm His Word and the resurrection of the Lord Jesus Christ.

Life has not changed much since then.  There is once again a global crisis, and in some parts of the world there is severe persecution.  The Lord has not changed either!  What the Lord did then He can and will do again. The kingdom of God is like this!

Attribution notice: Most Scripture quotations taken from the NASB. "In the Father's Hand" illustration by my daughter, C.V. Lacroix. You can find more of her lovely artwork on A Brush with Life.

Author's note: If you enjoyed this post, you may also like The Link Between Two Realms, God's Supernatural Provision Using People, Changing the Atmosphere, The Power of two or Three, Against Entropy, Faithful in the Little Things, and the other posts in this blog available through the Home Page. You may also access my complete blog directory at "Writing for the Master." Now I would like to ask you a question.

Len Lacroix is the founder of Doulos Missions International.  He was based in Eastern Europe for four years, making disciples, as well as helping leaders to be more effective at making disciples who multiply, developing leaders who multiply, with the ultimate goal of planting churches that multiply. His ministry is now based in the United States with the same goal of helping fulfill the Great Commission. www.dmiworld.org.
Posted by Len at 4:10 AM