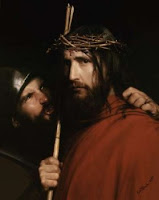 The very nature of the kingdom of God is secretive. This is foreign to our thinking, because normally a kingdom is known to everyone. Yet throughout the Word of God, we find evidence of the secret nature of God’s kingdom.

According to the apostle Paul, Adam was a type of Christ (Rom 5:14). He was the first man, and through him, sin entered the world. Jesus was the second Adam, through him righteousness has been made available to all men. For as in Adam all die, so also in Christ all will be made alive. (1Co 15:22).

Likewise, Noah’s ark was a type of Christ. Through its construction, eight people were brought safely through the waters that destroyed the earth. As the apostle Peter wrote, “Corresponding to that, baptism now saves you--not the removal of dirt from the flesh, but an appeal to God for a good conscience--through the resurrection of Jesus Christ.” (1Pe 3:21).

We could go on with many examples like Moses, Elijah, and Esther. But it’s well a established fact that Christ is enfolded in the Old Testament and He is unfolded in the new. While Christ could be found in every book of the Old Testament, His own people who knew those Scriptures did not recognize Him when He came to them. “He was in the world, and the world was made through Him, and the world did not know Him. He came to His own, and those who were His own did not receive Him.” (Joh 1:10-11)

Some Have Seen the Coming Kingdom
Jesus revealed His kingdom to His closest followers and still does. He once said, "For the Son of Man is going to come in the glory of His Father with His angels, and will then repay every man according to his deeds. Truly I say to you, there are some of those who are standing here who will not taste death until they see the Son of Man coming in His kingdom." (Mat 16:27-28)

And then six days after saying this, He took Peter, James, and John with Him up onto a mountain to pray. During that time, He was transformed and his clothes became dazzling white, whiter than anyone could bleach them. The disciples saw Moses and Elijah talking there with Jesus. And the Father spoke, saying, “This is My Son, with whom I am well please. Listen to Him.” (Mt 17:1-5). Jesus is central in the kingdom of God, not Moses or Elijah, or anyone else. We’ve got to listen to Him and Him alone. His glory was revealed on that mountain to the three closest disciples, yet He told them to keep it a secret until He had risen from the dead. And Jesus said that He will return in the same glory of His Father that they saw on that day.

Jesus keeps His presence secret
We read in Mark’s gospel that once when Jesus entered a house, he did not want anyone to know he was there. “Jesus left that place and went to the vicinity of Tyre. He entered a house and did not want anyone to know it; yet he could not keep his presence secret.” (Mark 7:24). In this passage, the Greek woman from Syro-Phoenecia sought Him out and found Him. She pressed in and got what she needed from Him, which was deliverance from demons for her little daughter.

Another time, Jesus’s own brothers admonished Him not to move about secretly. “Therefore His brothers said to Him, ‘Leave here and go into Judea, so that Your disciples also may see Your works which You are doing. For no one does anything in secret when he himself seeks to be known publicly. If You do these things, show Yourself to the world.’ For not even His brothers were believing in Him. So Jesus said to them, ‘My time is not yet here, but your time is always opportune. The world cannot hate you, but it hates Me because I testify of it, that its deeds are evil. Go up to the feast yourselves; I do not go up to this feast because My time has not yet fully come.’ Having said these things to them, He stayed in Galilee. But when His brothers had gone up to the feast, then He Himself also went up, not publicly, but as if, in secret.” (Joh 7:3-10). The time had not yet come for Jesus to reveal Himself, so He went to the feast by Himself, as if in secret.

Another example would be the time after His resurrection when He appeared in a different form to the two disciples on the road (Mk 16:12). They did not recognize Him until He opened their minds and revealed Himself to them (Lk 24:16,31).

I find it interesting that there were times when Jesus wanted to keep His presence secret. I believe He is the same yesterday, today and forever. And there are times even now that He is ascended when He prefers not to reveal His presence.

Jesus has revealed the secret of the kingdom to His disciples
Furthermore, while Jesus preached to the masses, He kept His secret kingdom from them. “With many such parables He was speaking the word to them, so far as they were able to hear it; and He did not speak to them without a parable; but He was explaining everything privately to His own disciples.” (Mar 4:33-34). He gave a full explanation of His parables to His disciples, because they had been given the secret of the kingdom. Jesus told His twelve disciples, “The secret of the kingdom of God has been given to you. But to those on the outside everything is said in parables.” (Mark 4:10-11). God does not reveal the secret of His kingdom to those on the outside, but only to His true disciples.

The apostle Paul wrote to the Corithians, “This, then, is how you ought to regard us: as servants of Christ and as those entrusted with the secret things of God.” (1 Cor 4:1). He also wrote, “We speak of God’s secret wisdom, a wisdom that has been hidden and that God destined for our glory before time began. None of the rulers of this age understood it, for if they had, they would not have crucified the Lord of glory.” (1 Cor 2:7-8). The wisdom that God has given to the Church is a secret wisdom revealed by the Holy Spirit. No one can know God’s thoughts except the Spirit of God, and those to whom the Holy Spirit reveals God’s thoughts. The man without the Spirit does not accept these things. They seem like foolishness to him. But the true disciples of Jesus Christ have the mind of Christ, because the Spirit has revealed it to us – even the deep things of God.

Putting it All Together
There is so much more I could write about. But it’s enough to say that the kingdom of God is from another world. It’s hidden like treasure hidden in a field. While Christ is found in every book of the Old Testament, the Jews did not recognize Him when He came to them.

Jesus likes to keep secrets. To those on the outside, He spoke in parables. But the secret of the kingdom was given to His closest followers. The mysteries kept hidden for ages past have now been revealed to the Church through His apostles, particularly the apostle Paul.

And not only His message is kept secret, but also His presence. We read in the gospels that just as Jesus often kept His presence secret, and He still does today. He is present with His people always, but we usually do not recognize it, except by faith. I am so thankful that He sometimes chooses to allow us to tangibly experience His presence.

Does He reign as King in your heart today? If not, then why not ask Him to do so? He wants you to pursue Him and show Him you really want Him. Seek the Lord while he may be found. Call upon Him while He is near. (Is 55:6). If you seek Him, you will find Him, if you search for Him with all your heart (Jer 29:13).

Author's note: If you enjoyed this post, you may also like the other posts in this blog available through the Home page of this blog. I recommend The Link Between Two Realms, The Kingdom of God is Like This, Led by the Spirit, and The Kingdom of God as Revealed to James Agboola. You may also access my complete blog directory at "Writing for the Master."

Len Lacroix is the founder of Doulos Missions International.  He was based in Eastern Europe for four years, making disciples, as well as helping leaders to be more effective at making disciples who multiply, developing leaders who multiply, with the ultimate goal of planting churches that multiply. His ministry is now based in the United States with the same goal of helping fulfill the Great Commission. www.dmiworld.org.
Posted by Len at 5:39 AM